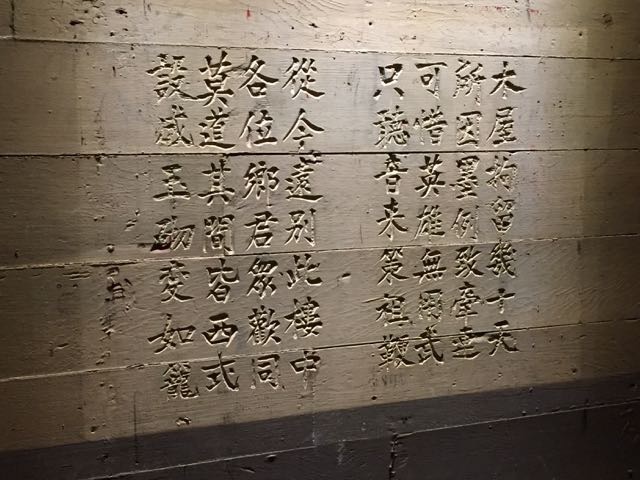 I celebrated my birthday and Thanksgiving with a visit to the gorgeous Angel Island in the San Francisco Bay Area. The weather was cold and sunny, with beautiful views of  San Francisco, Marin County and Berkeley. We also visited the US Immigration Station (USIS), which is also known as the Ellis Island of the West.

Unfortunately, its natural beauty is tempered by the ugly history of the USIS which mirrors the immigration politics and xenophobia playing out in our current political season. As European immigrants arrived by the thousands in the 1800s, Asians already here were seen as a threat and deprived of the most basic rights. In 1882, the Chinese Exclusion Act (CEA) was enacted by the federal government, to prevent any new Asians — primarily Chinese — from coming in to the USA. Sadly, the USIS primarily became nothing more than a detention center to enforce the CEA.

When Angel Island became a California State Park in the late 20th century, park rangers discovered beautiful carvings on the walls of the main building. Detainees had written poems and messages on the walls as they waited for their cases to be processed.  Many of these poems have been restored and translated, and are chronicled in several books.

The US’s racist laws and policies were not repealed until the Immigration Act of 1965, which gave every nationality the same immigration foothold. Today we know, of course, that immigrants are a huge asset to the American economy and society. The Chinese are considered a “model minority” who achieve higher levels of success than many other Americans.

The linguistic and racial diversity from immigration continues to propel the US economy ahead of the rest of the world. Keep this in mind as you hear the heated rhetoric during this election season.