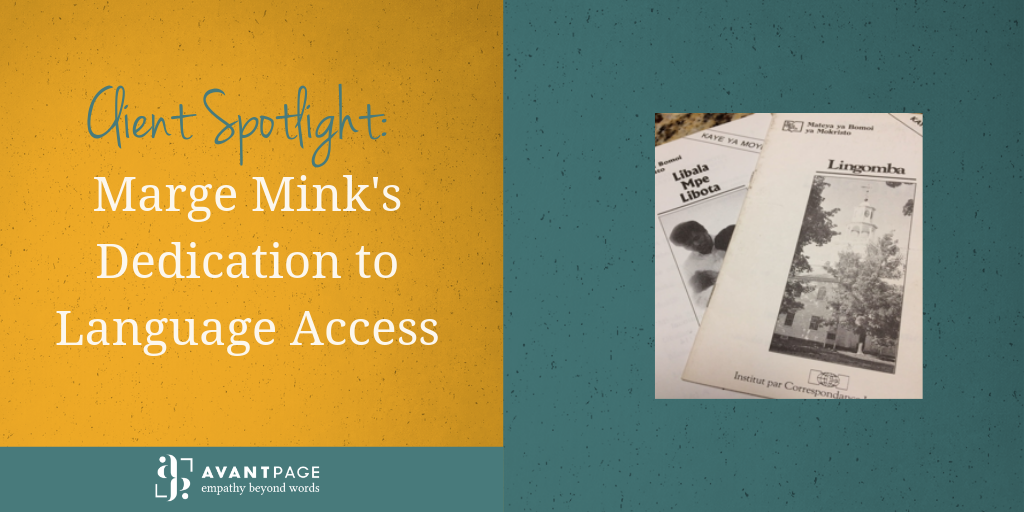 One of the best parts of my job as Head of Client Services at Avantpage is the opportunity to sit down, in real life, with our clients. In a world full of email, instant messaging, and CRMs, to sit around a table with a handful of Avantpage partners is a rare treat. Even rarer is the opportunity to step away from the conference room, sit down to lunch, and talk about things other than translation workflows, style guide updates, and budget management. One such occasion came back in August of 2018. Our Account Manager Eduardo Diaz and I were the lucky recipients of an invitation to lunch at a local Mexican restaurant by WA Department of Licensing (DOL) Forms and Records Analyst, Marge Mink. (And just to be clear from the start: as an LSP with many government partners, it’s important to note that we always pay our own bills!)

Marge is our go-to expert at DOL for everything layout and design, and so, over an early lunch of flautas and tamales, we asked how she got into this field. She described an initial position in the early 80s with Valley Press, a printing company in Puyallup, WA. She walked us through a career path that led to the beginning of her tenure at DOL in the late-1980s. It’s interesting to imagine how much the field of

DTP and accessibility (Marge’s areas of expertise) has changed over the decades, but not as interesting as the story she told us next, or her dedication to language access.

While Marge was working with the print shop Valley Press, the owners began producing bible study materials for an Assembly of God missionary program they were involved in. Missionaries would send text via Kaypro computers, which would, in turn, be produced into a set of printed booklets. Once the printing work was complete, one French-speaking and one English-speaking missionary (the latter from Marge’s hometown of Erie, PA) set off with a set of 16 booklets in Lingala, the language spoken by the local tribe with whom they would be working. Marge was delighted to take part in this opportunity to provide greater language access to the tribe and the results were incredible – not just due to the content of the brochures themselves, but to the fact that this was the first time the tribe had seen or received a printed document in their language.

So fascinated was the local population with the material, the translations for which came partly from previously-printed ICI (Institut par Correpsondence International) booklets, that they asked to see a photograph of the person had produced such a treasure. So began the connection between the tribe’s Chief and Marge, who was working away back in rainy Puyallup. Marge described how moved she was by the impact her work was having on a community so far from her own, and her ensuing motivation to create a dictionary of Lingala vocabulary as a gift for the village: “When I found out they had never had a printed word previously, I asked my boss if we could run the booklets through the computer and search for all unlike words to create a dictionary. And we did!”

Lingala is a Bantu language spoken by over 70 million people across the DRC, Republic of Congo, Angola, and the Central African Republic. Literacy rates are low and it is considered a primarily spoken language. Its various dialects borrow English, French, Spanish, and Portuguese words from colonial rulers of the past. Unfortunately, Marge’s copy of the dictionary no longer exists, but the knowledge of what this customized printed document meant to the tribe and their language access is still very real. In her home in Olympia hangs a painting, created by the Chief to thank her for the care she took in producing this gift for his community. Cobbled together from white paint and natural colorings, the painting shows the Chief himself, sitting in the shade of his hut. 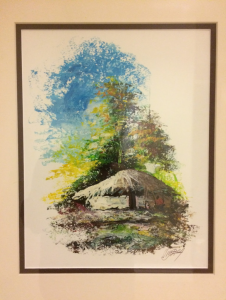 The Chief’s painting for Marge

I hope that the dictionary still exists somewhere and that it is as treasured and preserved in the Chief’s village as his painting is in Marge’s home. Whether it does or not, Eduardo and I were delighted to step out of our work shoes for a few minutes and to hear such an inspiring and personal story. We work hard to promote language access at Avantpage, and the thought that we help create cultural bridges is why we do what we do. It’s a wonderful thing when we see our clients striving for the same goal, and in such fascinating and unexpected ways.

Joanna oversees sales growth by ensuring that our clients receive excellent customer service and dedicated account management. She has always had a passion for languages, and believes that language access is a fundamental right. Over the last ten years, Joanna has worked in many different aspects of the translation industry, and brings this varied experience to Avantpage’s clients and partners. But she’s other things too! Joanna is an avid film-lover and board member of the Sacramento French Film Festival. She enjoys traveling, reading, and playing the piano – all in between remodel projects in her Victorian home.