How Our Team Engages with the Democratic Process: Monika Wiatrowska 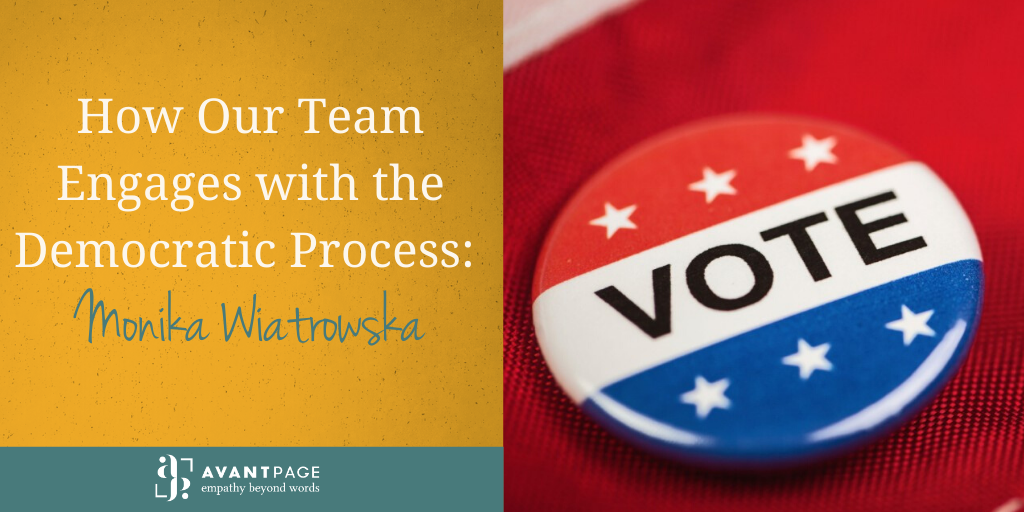 As the 2020 election draws near, it’s important to remember how much of a role language and language services play in an election cycle. While democratic elections are based on the free ability to vote, many Limited English Proficient (LEP) immigrants and citizens may struggle to effectively partake in the democratic process. Language barriers can create a lack of understanding as to how the voting process works, and insufficient translation of ballots and other election materials can prevent LEP voters from effectively understanding who or what they are voting for.

Democracy, and the ability to effectively partake in the democratic process, is not to be taken for granted. We asked our team members what democracy means to them, in an effort to illuminate the experiences of varying people with different languages and cultures, who live in different countries. We hope that, in this exercise, we may all come to value the democracy the United States provides for the true privilege it is.

Monika’s Participation in the Democratic Process

Monika Wiatrowska, our Operations Manager, has voted in numerous elections. Her home country, Poland, is democratic and she feels “it is necessary and important [to participate in elections].” While this is true, Monika has a mix of feelings about elections in Poland, and whether her vote makes a difference.

Of elections in Poland, she says “there is no actual opposition to the right-wing government, which is very traditional, racist, and does not believe in climate change. [Participating in elections] is basically choosing the lesser evil.” Because the right-wing government has been prominent for a lengthy period of time, the general population struggles to believe that any positive changes will come out of elections. “The experience is more or less like fighting a losing battle. The opposition is weak, not united, and chaotic.”

All of that being said, Monika still believes in casting her vote and does so in every election. As to whether her vote makes a difference, Monika is conflicted. “Yes and no. Yes, because thinking my vote doesn’t make a difference is ignorant and because it is my right to vote. No because, in Poland, the young people who should vote and make a difference are disinterested in politics.”

Most importantly, Monika urges others to get involved with the democratic process. “People need to be involved so democracy can evolve and not become endangered. If you have the right to vote, it means you can care for what is happening in your city, your country, and the world.” To Monika, the most important aspect of voting in elections is voicing your opinion for a better world, and having your government see you show up. “I think that governments need to see that citizens care and are present in the decision making. There should be constant communication and transparency between both parties: the citizens and the government, so we can feel that we make a positive difference.”

Ensuring that every eligible voter gets to participate in the democratic process begins with ensuring all eligible voters can understand how to vote, and who they are voting for. If you’d like to prepare your election materials for the upcoming 2020 election, we can help. Call us at 530-750-2040, or request a free quote today.