How To Increase Asian American Voter Turnout With Translation 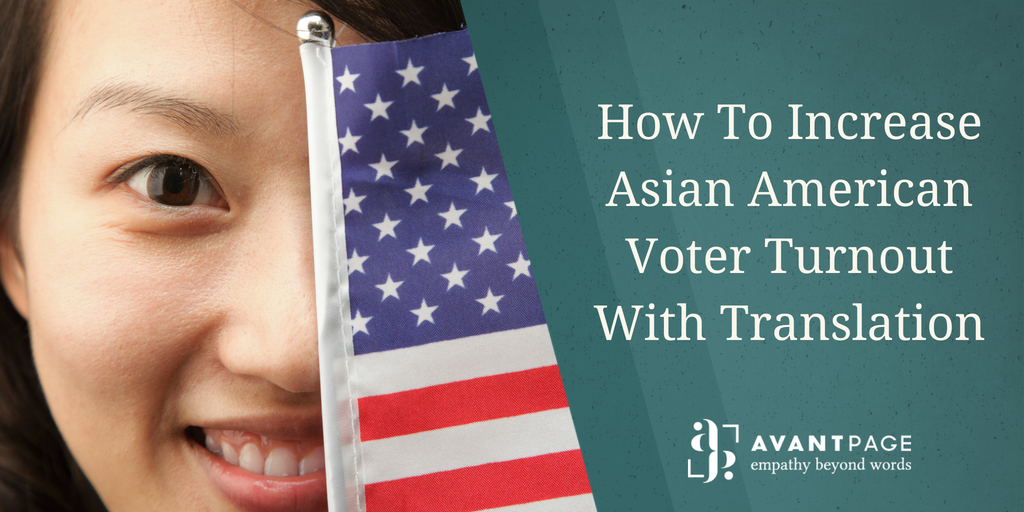 Asian American voter turnout should be an important issue for any agencies, candidates, and causes looking toward the 2018 election and beyond.

While the U.S. Census Bureau may group all 20 million Asian Americans into one category, the reality is that these people have roots in more than 20 different countries and dozens of different cultural backgrounds. There is not a single common language that agencies, causes, or candidates can use to communicate in and therefore increase Asian American voter turnout.

A language services provider, such as Avantpage, can help your organization understand the vast array of Asian American languages and how to provide properly translated materials to specific communities.

While Section 203 of the Voting Rights Act requires certain jurisdictions to provide language assistance at polling places, this law should be the beginning and not the end of an agency, cause or candidate’s efforts to increase Asian American voter turnout.

First, government agencies should review current policies and processes to ensure they adhere to Section 203. For example, while as many as 60 percent of Asian Americans voters rely on language assistance at the polls, only 27 jurisdictions in the United States are covered for at least one Asian language, and even in covered jurisdictions, language assistance is not always fully available. One 2012 study showed that 45 percent of a sample of covered precincts had missing or poorly displayed translated materials, and 23 percent lacked at least one Asian-language bilingual poll worker.

For those agencies that are complying with Section 203 rigorously, the next step to increase Asian American voter turnout would be to expand language access beyond the minimum population threshold. States and counties do not have to not wait for the federal government’s direction to expand assistance to LEP communities. For example, before the 2016 election, Cook County, Illinois, chose to provide Korean-language ballots even though it was not required by Section 203. Some states, such as California, have their own state-specific election codes that guarantee language assistance to populations smaller than what is outlined in federal law.

A language services provider, such as Avantpage, can help your organization go beyond Section 203 and provide language assistance to a broader group of Asian American voters to help increase turnout.

Candidates and causes should care about reaching out to Asian American voters, as it’s been shown that Asian Americans make up the winning margin in many state districts.