Indigenous Languages Are Endangered, but Christopher Is Keeping His Alive 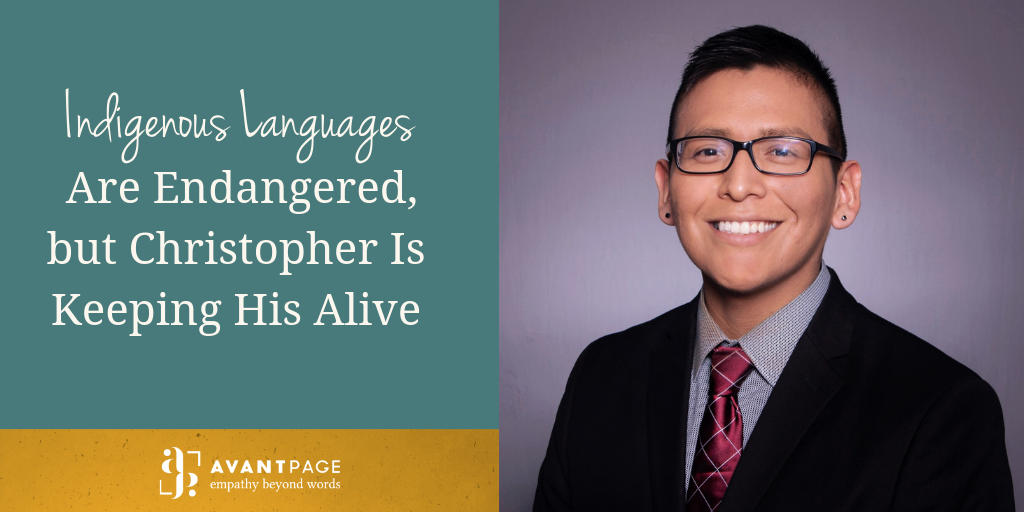 The United Nations declared 2019 as the International Year of Indigenous Languages. In this declaration, the UN is hoping to raise awareness of endangered Indigenous Languages, the consequences of these languages disappearing, and the links between language, peace, and development.

Christopher is a full-blooded Navajo Native American. Growing up, he was taught the Navajo language and has put in considerable effort to keep his language skills. “Storytelling is its own subsection of Native American studies…less is written down and more is shared orally. Language is really big for Native Americans because of this.”

Christopher grew up in Northern Arizona on the Navajo Reservation and moved to California to pursue a college degree. When he first made the move, finding a new community was a significant challenge for him. “It took 6 years to find another full-blooded Native American, which conflicted with my need for community. You can go to Pow Wows here and there, but even then it’s 1-2 days out of the month where you’re surrounded by your people. It’s hard to find a permanent community unless you’re on the Reservation. I didn’t fit into other cultural circles.”

Christopher made a concerted effort to maintain his cultural identity otherwise. He was driven to make the presence of Native American known, and advocate for those who didn’t have the opportunities he did. “I sponsored a Sac State student who was also Native American. A big part of being able to help them was understanding where they came from. We’d have a lot of conversations about what’s different here, and how I succeeded in being thrown into this mix. A big part of [my cultural advocacy] is wanting to help others later.”

Christopher’s advocacy has taken shape as speaking engagements, sponsorship, and language practice. “You can’t hold a class on how to speak. I use [language] as a key point in resisting the urge to let [my] culture die. We’ve been programmed and predisposed to throw away the culture, and any retainment of that culture is done out of resistance.”

Christopher practices the Navajo language daily, even just with himself – translating daily conversations and words into his native language in his head. “Retain as much of your language as you can, but don’t feel pressure to remember anything. Big or small, take whatever steps you can to anchor your culture. Learn the language, go to Pow Wows, stuff like that…Retain as much as you can, and at least attempt to give back to the community that needs help.”