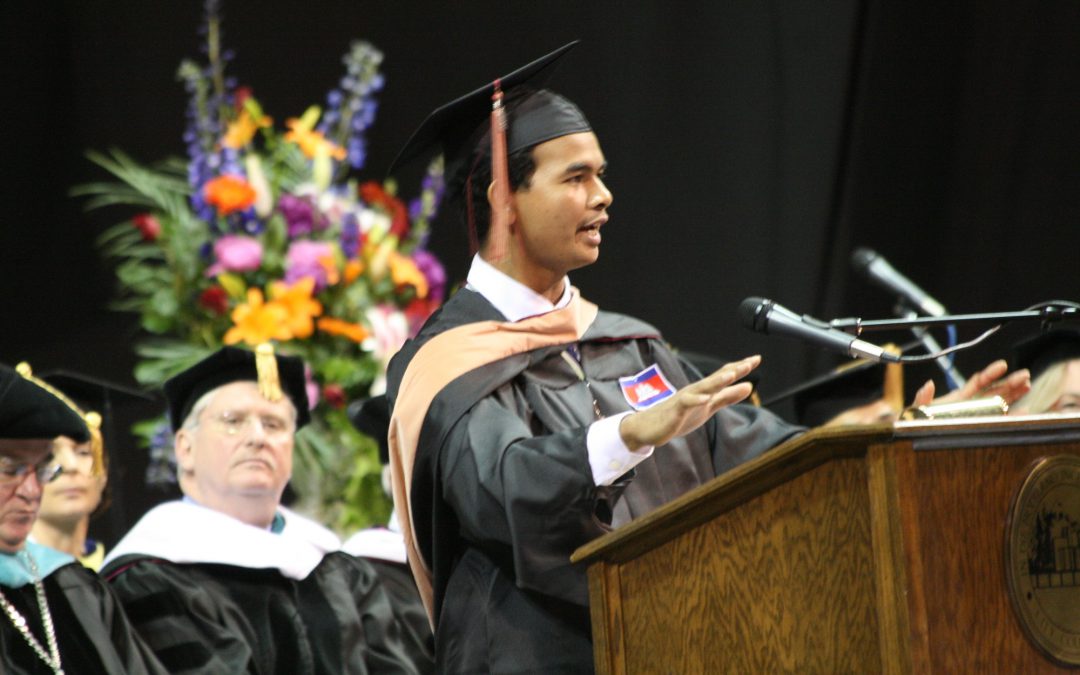 In 2008 native Cambodian Avantpage linguist Channdara Sos was proud to be City University of Seattle’s Distinguished Student Speaker for Commencement.

Channdara “Dara” Sos is one of Avantpage’s many dedicated translators, and we caught up with him in between projects to ask him a few questions about his life and work. Originally from Cambodia, Dara is fluent in Khmer and English, and he provides translation services for many of our English-Khmer projects.

Dara is from the Kandal Province in Cambodia, where he began studying English in the 7th grade. His home and school were located in a rural area with no electricity, and Dara vividly remembers studying English at night by candlelight, after completion of his other schoolwork. Eventually, Dara moved on to more advanced English tutelage, and embraced the language, literature and vocabulary. He appreciates Shakespeare (Romeo and Juliet is a favorite) and enjoys contemporary novels and nonfiction as well. Dara also loves Khmer literature, and enjoys creative writing in both Khmer and English.

Seattle, Washington:
A perfect city for a transplanted Cambodian

Dara has lived in America for almost ten years, and upon arrival in 2005, he settled in Seattle, Washington, to complete his university work. He was drawn to Seattle because of its large and vibrant Cambodian community, and because there were people from his hometown in Cambodia living there. Dara attended City University in Bellevue WA, and in 2008 was the University’s Distinguished Student Speaker for Commencement. He holds a Masters of Business Administration: Finance from City University, a B.S., Computer Science: Database Programming from the Royal University of Phnom Penh in Cambodia, and a Master Certificate in Six Sigma from Villanova University Online, Tampa, Florida. Dara loves his adopted hometown of Seattle, and particularly enjoys the moderate weather, natural beauty and myriad outdoor activities as well as the down-to-earth friendliness of his fellow Seattleites. An avid hiker and camper, Dara also plays soccer and volleyball in his free time. He and his wife, Tithvorlak “Vorlak” Mok, also from Cambodia, see children in their future. Dara is also thrilled to have his brother living here as well.

Giving back to the Cambodian community …

Most importantly, Dara is very active in Seattle’s Cambodian community, and he volunteers as a translator and interpreter whenever he can. “A lot of elderly Cambodians here are immigrants and refugees who have very limited English. Helping them to function more easily and confidently in American society through my linguistic skills is very fulfilling to me,” he commented. Dara has volunteered for a large number of Cambodian relief and support organizations, among them the Cambodian Cultural Alliances of Washington (CCAW), Cambodian American Support Network (CASNET), United Cambodian Development Association (UCDA), Asian American Dragon Boat Association (AADBA), Cambodian Women Health Organization (CWHO), Cambodian Assistance Foundation (CAF), Khmer Unity for Cambodia (KUC), American Red Cross Seattle (ARC), and Cambodia National Rescue Party (CNRP).

Rewarding work as an Avantpage translator

Dara thrives within a fast-paced work environment, and enjoys blending technology, linguistics and communication skills as a translator for Avantpage. He has previously worked for Amazon, Inc., as a Program Manager and Analyst and at Fred Hutchinson Cancer Research Center as a Financial Analyst. Dara holds WA DSHS certification in both translation and interpretation, and it was through the Washington State DSHS website that Lori Ann Reinhall, then Avantpage’s Vendor Manager, first connected with him as a candidate for Avantpage. As a translator, Dara most enjoys the fact that the work he does contributes positively to society, providing new opportunities for communication and understanding.