You Should Learn About Rare Languages: Hmong 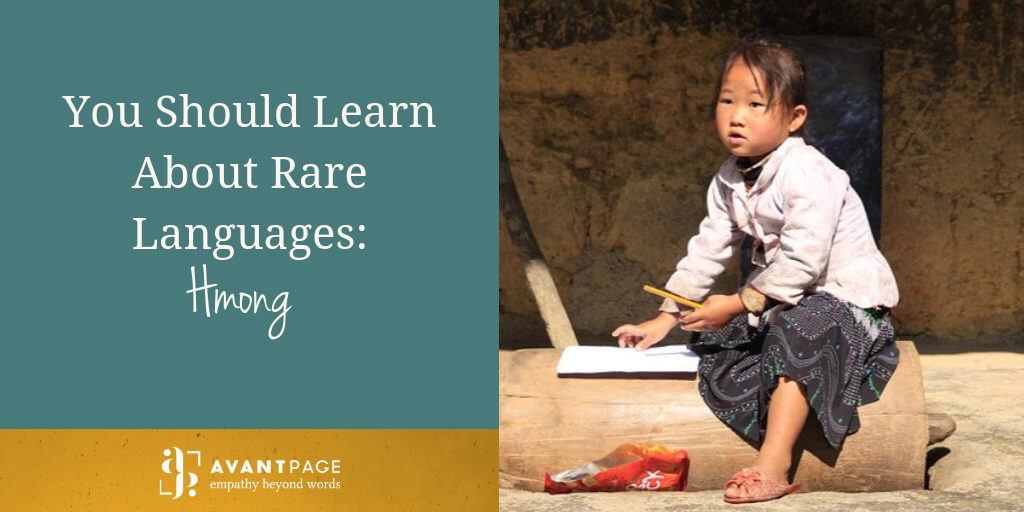 There are many rare languages in the world today in various states of endangerment or preservation. At Avantpage, we work with a variety of these languages to support their speakers and continue improving available opportunities for all people. When looking at supporting rare languages, and preserving them before they become endangered, education is of the utmost importance. Sharing information about a language and, more broadly, its culture can support better language preservation and cultural acceptance. With all this in mind, every month we’ll be highlighting a rare language we work with. This month we’re focusing on the Hmong language.

History of the Hmong Language

The Hmong language, or Mong, is a Hmong-Mien language, a group that consists mostly of minority languages spoken in Southern China and Southeast Asia. Apart from Hmong and Mien, this language family includes Hmu, Qo Xiong, Bunu, Pa-heng, She, Mun, and Biao Min.

Hmong is used primarily in China, Vietnam, Laos, Thailand, the United States, and French Guiana. While the exact number of speakers worldwide is unknown, it’s estimated that 2 to 3 million people use the language.

The standard dialect of the language is Western Hmong, a group of dialects spoken in southwestern China, Northern Vietnam, Northern Thailand, and Laos. The two major varieties that comprise this group are Hmong Daw and Hmong Njua, named according to the traditional colors worn by women of the different groups – White for Hmong Daw and Green or Blue for Hmong Njua. Outside the above-mentioned areas, the language is spoken by relatively substantial groups in Burma, France, and the United States; the most predominant population of speakers is found in China.

Today, most of the over 260,000 people of Hmong descent residing in the United States speak the dialects White and Green Hmong, White being the predominant version with 60% of speakers using it. The key differences between the dialects are in the pronunciation/phonology and vocabulary.

Interestingly, the Hmong language has no official status in the countries in which it is spoken. As a matter of fact, it consists of a number of dialects, many of which are unintelligible to speakers of other Hmong varieties. Linguistically speaking, each dialect is considered to be a separate language, since the definition of a dialect assumes it is a mutually intelligible language variety.

There are numerous writing systems used for writing the language, with Phahawh considered the most linguistically aware of them. It was developed mid 20th century by Shong Lue Yang, a spiritual leader honored among Hmong people as the Niam Ntawv (Mother of Writing). The most common Hmong orthography became, however, the Romanized Popular Alphabet (RPA), devised by missionaries in the 1950s.

While Hmong is a rare language, we work with it on a semi-regular basis in the translation work we do for varying clients around the United States. If your population includes Hmong speakers, we’d be happy to discuss with you how to reach them through translation services. Call us at 530-750-2040 or request a free quote today to get started.