You Should Learn About Rare Languages: Khmer 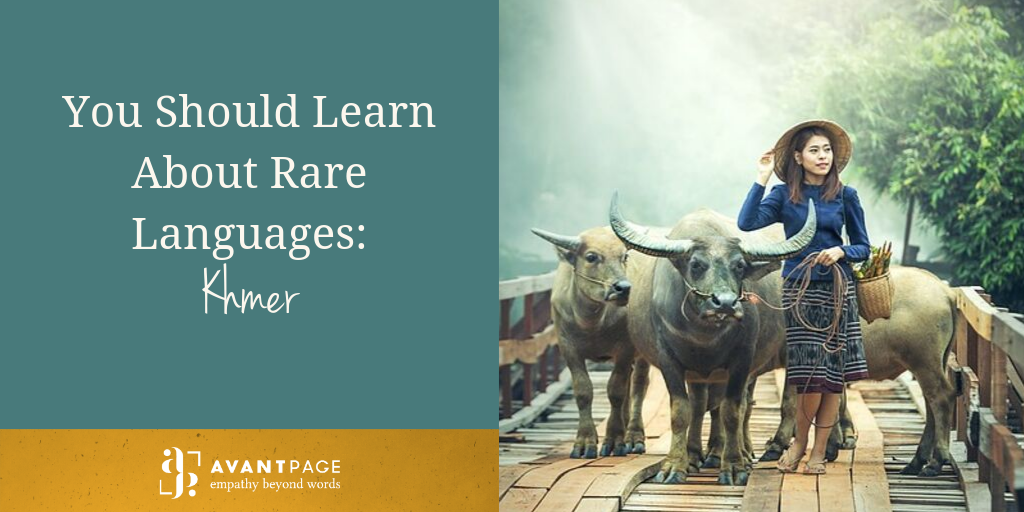 There are many rare languages in the world today in various states of endangerment or preservation. At Avantpage, we work with a variety of these languages to support their speakers and continue improving available opportunities for all people. When looking at supporting rare languages, and preserving them before they become endangered, education is of the utmost importance. Sharing information about a language and, more broadly, its culture can support better language preservation and cultural acceptance. With all this in mind, every month we’ll be highlighting a rare language we work with. This month we’re focusing on the Khmer language.

The history of the Khmer language

With approximately 16 million speakers, Khmer, also called Cambodian, is the language of the Khmer people and the official language of Cambodia. It is spoken by most of the Cambodian population, as well as in southeastern Thailand and southern Vietnam.

The vast majority of Khmer speakers use Central Khmer, a dialect of the central plain where the Khmer people are most heavily concentrated. As far as Cambodia is concerned, regional varieties exist in remote areas. There are two varieties that differ substantially from the others: the speech of the capital, Phnom Penh, and the version spoken in the Stung Treng province.

Outside of Cambodia, three main dialects are spoken by Khmer people native to the areas that were historically part of the Khmer Empire:

As the earliest recorded and written member of the Mon-Khmer group of Austroasiatic languages, the Khmer language has existed in written form since the early 7th century, with the oldest inscription in Khmer dating from 611 AD. The language uses a script originating from South India and South East Asia.

The modern version of the Khmer alphabet is syllabic, with each consonant having two forms – one with an inherent /a/ and one with an inherent /o/. Vowels are indicated using either separate letters or diacritics – written above, below, in front of, after, or around consonants. Their pronunciation depends on the form of the consonant used.

Probably the most notable feature of written Khmer is that, in a Khmer text, there are no spaces between words; visible spaces are used to indicate the end of a clause or a sentence. Khmer is an analytic and isolating language, with no conjugations, inflections, or case endings. Instead, particles are used to indicate grammatical relationships. Despite efforts to fully standardize written Khmer, many words have more than one accepted spelling.

While the Khmer language is considered rare, we work with it on a semi-regular basis in the translation work we do for varying clients around the United States. If your population includes Khmer speakers, we’d be happy to discuss with you how to reach them through translation services. Call us at 530-750-2040 or request a free quote today to get started.