You Need To Save This Glossary of Translation Terms 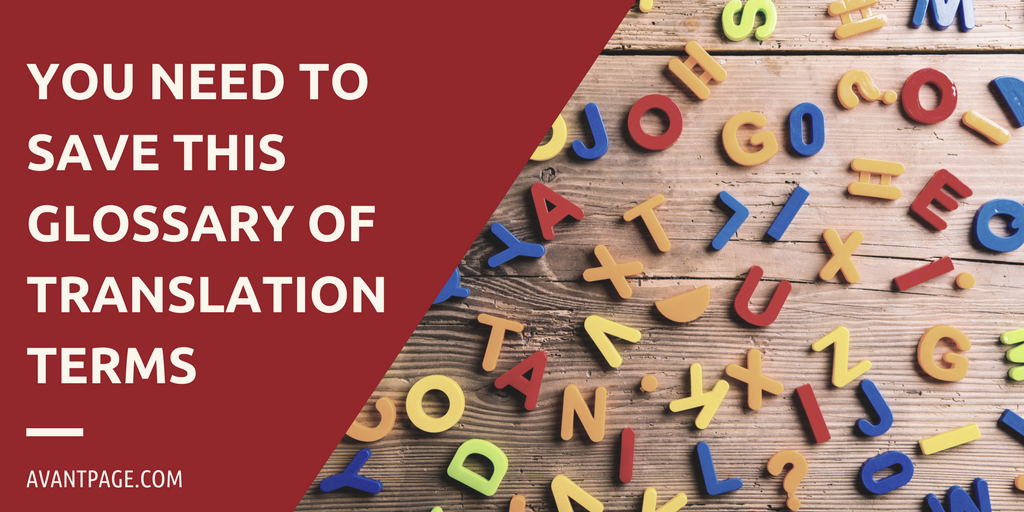 DTP, GILT, LSP, NMT … IDK! That last acronym stands for “I don’t know” and the rest represent some common translation terms. If you feel like you’re swimming in a bowl of alphabet soup after reading that list and you’re in charge of finding translation services for your organization, keep reading. Understanding some key terms and ideas can help you find the right Language Services Provider or LSP. Here is a glossary of some commonly used translation terms for your reference:

Desktop Publishing (DTP) is the design and production of publications and is a major component of linguistic services. The right firm will be able to format and recreate foreign language layouts with extensive knowledge of the intricacies of each language and an awareness of cultural issues that may need to be considered in design. Familiar with a wide variety of software applications, a DTP team supervises the process from start to printing. Avantpage can do all this in over 150 languages.

GILT stands for Globalization, Internationalization, Localization, and Translation. This term is used to refer to all of the linguistic and cultural related processes involved in global business.

Globalization refers to the processes that a company goes through to enter the global marketplace. It encompasses the internationalization process of intelligent, culturally aware planning and design, as well as the multifaceted localization process that occurs when the product is adapted for the new market. Sometimes, the abbreviation “G11N” is used for Globalization. This abbreviation is derived from the first and last letters of the word, while the 11 refers to the number of letters between the G and the N.

Healthcare Interpreting refers to oral interpretation that takes place in a medical or healthcare setting.

Internationalization is the process of ensuring that a product can be easily localized. This is an especially important concern when a new website, software application, or service line is created. Are there any untranslatable phrases? Are the cultural idioms going to be too difficult to understand? Can the date and money formats be easily understood? The abbreviation I18N stands for Internationalization, derived in the same manner as G11N.

Interpreting refers to the facilitation of communication between people who are not speaking or signing the same language. It refers to oral or signed communication, whereas translation relates to written communication.

Localization is the process of modifying a product to accommodate differences in distinct markets. This can include structure, graphic design, copywriting, transcreation, and anything else that needs to be changed for the market. A second definition, also widely used, is that localization is the adaptation of software, websites, and applications to meet the languages, technical requirements, and regional differences of the target market. The abbreviation for Localization is L10N, derived in the same way as G11N.

Neural Machine Translation (NMT) is an approach to machine translation that uses a large neural network, which is a computing system inspired by the biological neural networks of animal brains. Neural networks learn to do tasks by considering examples, generally without task-specific programming. Google and Microsoft translation services now use NMT.

Machine Translation is the process of using computer software to translate between languages.

Repetitions are phrases and sentences that are repeated and occur more than once throughout the document. A Translation Memory system will remember the way the first instance of the phrase or sentence is translated and automatically suggest this translation on all further occurrences. The translators will review all instances of these phrases and sentences to make sure that they are appropriate given the context.

Statistical Machine Translation is a type of Machine Translation that uses data from a large amount of existing bilingual material, known as a corpus, to translate commonly used words and phrases. Examples of multilingual data include the records of the European Parliament, which is produced in 23 languages. Google Translate has been using this type of software since 2007.

Style Guides provide translators with a list of standardized elements that must be handled the same way every time. These can include capitalization, grammar, measurements, acronyms, dates and numerals, text never to be translated, company trademarks, formatting (bold, italic, font use, etc.) currencies, and formal versus informal “voice” and tone of language. Style guides are unique for each target language, and larger organizations may maintain style guides in numerous languages.

Translation is the act of producing a text that communicates the same message in another language. This seems like the most basic of services, but in unprofessional hands, translation can do your company a world of damage. Just like you work with professional health care providers, you need professional translators. Trust a translation firm like Avantpage to avoid disaster!

Translation Glossary is a client-specific list of terms created to be used across all projects generated by a particular client. For instance, a glossary for a healthcare client might contain items such as agency names, health plan names, program names, job titles, and keywords. All of these items need to be translated the same way no matter where in the document they are.

Transliteration is writing a text in a different language so it “sounds” like the word in the source language. An example of transliteration would be writing the Russian word for thanks, “cпасибо” as “spasibo” in English script.

Translation Memory (TM) is a database of all previous translations that were created specifically for a client. Think of a TM as a long list of A = B, where A is a sentence from the source document and B is the same sentence translated into the target language. When you submit a new document, the document is uploaded into the Avantpage online translation system and is analyzed against the TM. There is no part of our process in which Avantpage submits text into a computer program and then receives a fully translated document – every document is translated by qualified human linguists.

Untranslated Segments are sentences that have never been translated before and will be translated “from scratch.”

As you move through the process of your translation project, keep this glossary handy to help define key terms.

At Avantpage our experienced team can help guide you through the translation process and make it fast and easy. To find out more about our services call us at 1-530-750-2040 x11, or request a free quote.