How to Think About Translating Gender-Specific Words 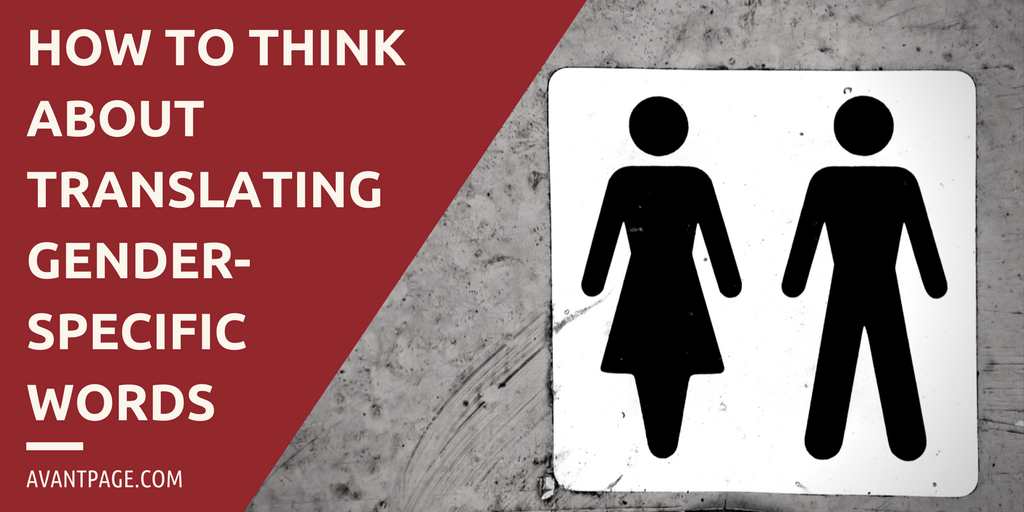 Since the 1970s, numerous sociolinguistic studies have demonstrated the effect of grammatical gender on the assumptions a listener makes.

As of 2015, 90 percent of nurses in the United States were female, according to Becker’s Hospital Review. Since the nursing profession tends to be female-dominant, one approach to using a gendered word for “nurse” would be to use the female form of the word in languages that have gender and which use a different form for female and male nurses. In many nations, the female to male ratio in the nursing profession is even more skewed, and the use of the masculine for nurse would call attention to the social environment instead of fading to the background.

Avantpage’s U.S. clients tend to be purposefully linguistically neutral regarding gender identifiers, but we already know that this neutrality is not as easy in all languages. Should we have different criteria for the English and the target text, then? Here we must exercise caution because we don’t want to treat the immigrant population in the U.S. differently than we do the non-immigrant population.

Let’s look at the problem of gender inclusiveness using a specific language example: Russian. Russian has two genders, referred to as masculine and feminine, as well as case endings on nouns, so gender pervades an entire phrase and even the level of the sentence or multiple sentences in longer discourse.

The word for nurse in Russian is Медсестра (feminine) and Медбрат (masculine), pronounced roughly like “medsestra” and “medbrat,” and they translate very literally like “medical sister” and “medical brother.” (Though, after some Internet research, we found that the feminine form is used much more frequently than the masculine form). Within each gender are six cases: nominative, accusative, dative, prepositional, instrumental, and genitive. This makes for 12 endings on “nurse” that one must know to talk about a nurse in a Russian sentence. This is not even mentioning the fact that we’re still talking only about the singular, so we can double this number to include plural “nurses” to roughly 24 case endings to remember!

If we want to speak generally about a nurse, whose gender is unknown and unimportant for the context, we run into a readability problem if we try to write both masculine and feminine forms into the text. Not only would we be doubling the noun itself in the sentence, but all the case endings on adjectives and adjectival phrases would double (i.e., advice nurse, nurse on duty).

One way to get around this problem is to avoid mentioning the gender of the practitioner is to say something such as, “person who practices nursing.” In Russian, the nursing profession is уход, (pronounced roughly like “uhed”), but this is a wordy circumlocution and not preferred.

One of Avantpage’s clients has a solution to the wordiness problem in its Spanish style guide for consumer marketing documents. Though Spanish does not have case endings like Russian does, Spanish does have a gendered noun for nurse: “enfermero” (masculine) and “enfermera” (feminine).

The guide states that the translator should use “enfermera” only when referring to obstetrics and gynecology. Otherwise, the writer should use the masculine form, “enfermero” as there are males and females in this profession. This solution is clever because it takes the “use the masculine for the general” rule that many languages do, but in this case, a male nurse is a marked form. That is, the masculine ending calls attention to the unusual social situation that it is encoding.

In this way, the client is both progressive and readable in its approach to the grammatical puzzle the language presents us. While it certainly won’t change the ratio of male to female nurses in the healthcare industry anytime soon, it is a satisfying response to the need to communicate clearly and fairly to a linguistically diverse audience.

At Avantpage our experienced team can help guide you through the translation process and make it fast and easy. To find out more about our services or to get a free quote, Email us at [email protected] or call us at 1-530-750-2040, extension 11.