Tips for translating into uncommon languages 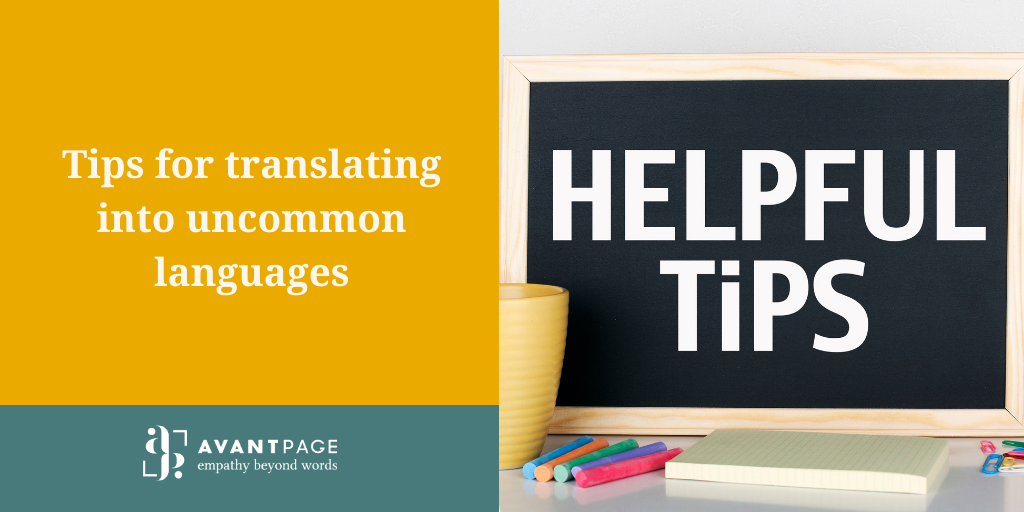 Working with uncommon languages can present various challenges. Here are our tips for success in your rare language translation project:

First: Make sure you have the right language

Therefore, confirm that you have selected the accurate language. The Avantpage team can help you if you are unsure. Remember, the target community for rare languages tends to be small, and confusion could lead to choosing an incorrect language.

Second: Identity what type of language you’re dealing with

Once you have the accurate language, find out everything you can about it.

Make sure you know what the language looks like (using Google or Omniglot), if it runs right-to-left, if the characters require a particular font, and any other relevant characteristics of the target community. With this information, you can categorize your language:

Before we proceed with the project, our project manager (PM) will work on confirming linguists’ availability and giving you the best possible turn-around-time (TAT)

Note that resources for rare languages are sometimes limited, and linguists might not work with our usual computer assisted translation (CAT) tools. This might mean that some additional time may be required for the translation to be ready. If no resources are available, our PM will unfortunately have to decline the project.

Fourth: Proceed with the project and receive your translated files

Projects with rare languages will likely need more supervision from our PM. Here is a sneak peek at what’s going on from the Avantpage side: