How To Translate Emojis Across Cultures And Avoid Mistakes 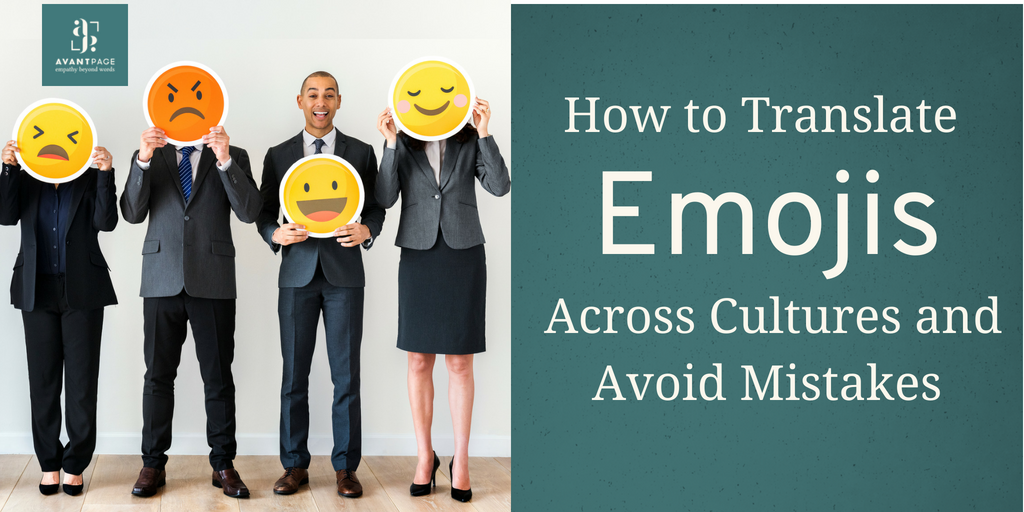 Emojis get a lot of credit and take a lot of criticism. These iconic graphic symbols (don’t confuse them with emoticons) are either ruining civilization or represent the future of communication. A string of these contemporary hieroglyphs can either save your relationship or make you less emotional. Linguists, scientists, and sociologists argue that they helping us to communicate better than ever despite the popular notion that they are ruining people’s grasp of language. ?‍

Developed in Japan in 1999, emojis are Britain’s fastest growing linguistic resource. What started as a set of 176 icons has grown to more than 2,000 symbols when taking into account variants for gender and skin tone. More than 90 percent of social media users communicate via emojis, with more than 6 billion exchanged daily. In 2015, The Oxford Dictionary selected ? as the Word of the Year. You can read The Bible or Shakespeare with emojis. Some hotels allow guests to order room service with a string of icons. They can ruin Cookie Monster’s day or sum up the best day of a tennis star’s life. ???

Emojis are a way to communicate very complex extra-linguistic meaning. When we’re talking in person, we express this meta-linguistic commentary with tone, intonation or stress. For example, I can speak with a sarcastic voice, but I can’t type with one. However, I can put an emoji before or after a text to show that it should be understood in a sarcastic voice. These symbols support the language that somebody uses and takes it one step further. Emojis can help add back in some of the context and emotion chipped away by the communication medium that is text-only.

Emojis cannot be defined as a complete and separate language for many reasons, especially because they don’t have an ample lexical set or a grammar that would define word order, morphological markers, or semantic roles, for example. Instead, they’re part of a variety of resources we use in written communication such as punctuation, underlining, bold, font, or text color. And like all written language resources, people do have to be socialized into the conventions to use them appropriately. That said, often, emojis are used creatively in the moment. What one emoji means in one conversation in one location or setting is not going to be the same with others. Context determines meaning.

How To Translate Emojis Across Cultures, Languages, And Generations

Translating emojis requires cultural competence in addition to linguistic competence. The complexity of context requires linguists to consider cultural differences because of the conventions that people develop. People learn these conventions through social interactions. If you participate in these interactions, then you know how to use language in a way that conforms with those conventions because you’re socialized into it. This is why sometimes adults don’t understand teenagers’ way of talking—they haven’t been socialized into the group.

The same is true for communicating with emojis. The same symbol can take on different meanings in different cultures. For example:

?: In the United States, Westerners use the “face with tears of joy” emoji to show express extreme laughter in reaction to a humorous situation. But in China, people use this same symbol to express laughing helplessly at a frustrating situation. Alternatively, some Middle Eastern cultures interpret this emoji as depicting crying and grief.

?: The thumbs up emoji is popular in the United States to express quick approval of an idea. However, in the Middle East, it is traditionally an offensive gesture.

?: While this symbol can mean “OK” in the United States, it can be offensive in Latin America.

?: The panda bear emoji is often used in China to express friendship, love, endearment, and cuteness. But, this symbol doesn’t carry that same meaning in other parts of the world.

When translating emojis for social media or online chat scripts, it’s crucial to be aware of culture-specific conventions. When businesses or individuals misuse emojis, it can prove to be hugely damaging, especially when trying to reach younger audiences. ? ? ?

To avoid any potential emoji translation embarrassment, look to hire a language services provider with a variety of translators. An effective LSP will select the right linguist who is culturally competent in both the source and target languages and cultures. This will ensure that the translation is culturally and linguistically appropriate to your needs.? ? ?

At Avantpage our experienced team can help guide you through the translation process. To find out more about our services or to get a free quote, email us at [email protected] or call us at 530-750-2040 x11.