You Should Learn About Rare Languages: Farsi 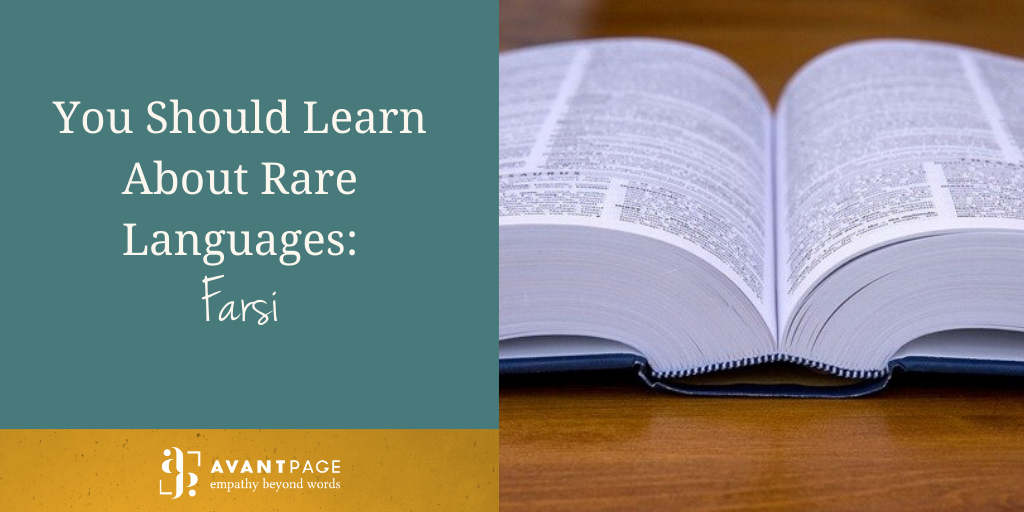 There are many rare languages in the world today in various states of endangerment or preservation. At Avantpage, we work with a variety of these languages to support their speakers and continue improving available opportunities for all people. When looking at supporting rare languages, and preserving them before they become endangered, education is of the utmost importance. Sharing information about a language and, more broadly, its culture can support better language preservation and cultural acceptance. With all this in mind, every month we’ll be highlighting a rare language we work with. This month we’re focusing on the Persian (Farsi) language.

Approximately 110 million people worldwide speak Farsi, with populations of Farsi speakers concentrated in Iran, Afghanistan, and Tajikistan. In Afghanistan, the language is officially known as Dari, and in Tajikistan, it is known as Tajiki. Farsi is the official language of each of these three countries but is a prestigious cultural language in many other regions of Western, Central, and South Asia.

Linguists classify Farsi as a continuation of Middle Persian, which was the official literary and religious language of the Sasanian Empire. The Sasanian Empire was the last kingdom of the Persian Empire before the rise of Islam, and it ruled from the 3rd to the 7th century.

Farsi has had a considerable influence on the languages of neighboring countries, particularly in Central Asia, Anatolia, and Caucasus, but also on other Indo-Aryan languages, especially Urdu, and even Arabic (Bahrani Arabic). With its rich literary history and famous works, Farsi is also considered to be the first language in the Muslim culture to break through Arabic’s monopoly on literature writing.

Farsi is written right to left in the Persian alphabet, which is a modified version of the Arabic script. A notable feature of the language is that its writing system (abjad) includes letters only for consonants. Vowels, when indicated, are written using a combination of consonants or with diacritics.

As far as the Farsi language community in the United States, approximately 500,000 people of full or partial Iranian ancestry (unofficial sources even give estimates over 1 000 000) currently reside in the U.S. Experts distinguish three phases of Iranian emigration to the United States.

While the Farsi language is considered rare, we work with it on a semi-regular basis in the translation work we do for varying clients around the United States. If your population includes Farsi speakers, we’d be happy to discuss with you how to reach them through translation services. Call us at 530-750-2040 or request a free quote today to get started.