2020 Census Insights on Language Use in the U.S. 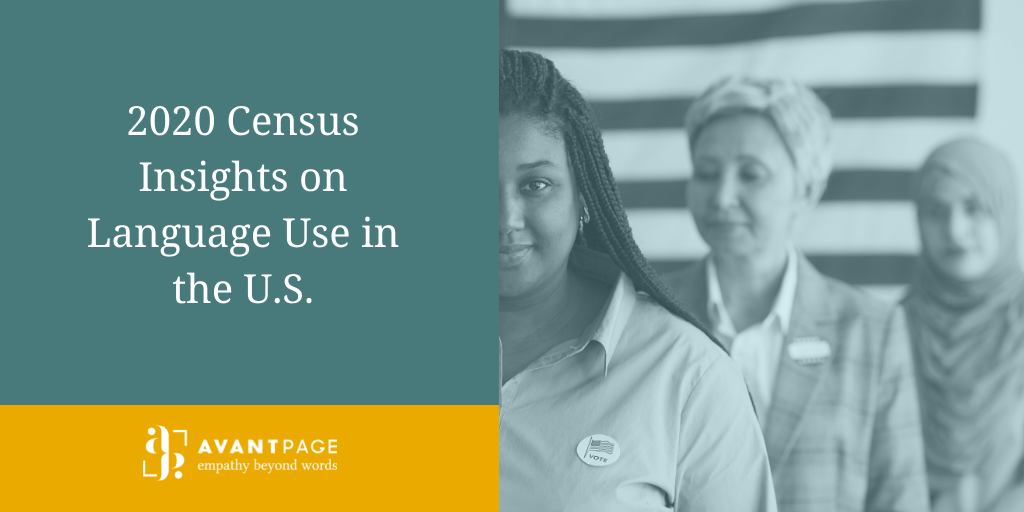 Our founding fathers wrote in the Constitution of the United States, Article 1, Section 2 that the U.S. must have a decennial census to count every person in the country and provide that information to the U.S. The census data is used to determine the number of seats for each state in the U.S. House of Representatives, how to distribute hundreds of billions of dollars in federal funds to communities, draw congressional and state legislative districts, plan businesses, and more.

The census also tells us who we are as a country: our makeup of sex, race, age, and more. This data helps organizations plan and budget for services for the limited English proficiency (LEP) population. In this blog, we’ll look at some information about the 2020 census, results, and what this means for organizations and the LEP population.

The 2020 census added new measures of collecting data that could show the growth and change across the U.S., and also paint a more accurate picture due to better census access and language support.

For the first time, the 2020 census data was collected online, along with the traditional methods of paper and phone. While the online measure stemmed from budget cuts and staying current with how people live and work now, the online census was also expected to show a more comprehensive view due to accessibility and ease of participation. The Census Bureau anticipated that about six out of 10 households would fill out the online form instead of the paper version. The online version at my2020census.gov went live on March 12, 2020, and was open through July 31, 2020. People could also fill out the paper form or give their responses over the phone.

In addition, the 2020 census was available in 13 languages, while the 2010 data collection was only in 6 languages. By expanding the number of languages, over 99% of all U.S. households were able to respond to the census in their language. The Census Bureau also provided video guides narrated in 59 non-English languages to help people take the English census. For more information about these languages, visit the U.S. Census Bureau website.

The Effects of the 2020 Census Results

In November 2021, the 2020 American Community Survey (ACS) should be releasing limited English data using experimental data sub-sets. The ACS is using experimental weights instead of annual data products since the COVID-19 pandemic affected the ability to reach people. The data can help add to an understanding of the linguistic landscape of the U.S., which drives federal funding distribution and understanding or predicting language needs within communities. Understanding these changes over time are critical aspects to help drive well-thought-out language access plans.

As your company starts planning strategic initiatives, language plans, and budgeting for 2022, you’ll want to consider the 2020 census results. Understanding the growth and declines in languages over time can help for strategic planning and budgeting. You might be able to revisit some languages and/or add new ones to your list.

Also, if you participate in more than 4b dollars of federal funding, this data is in part what helps to determine how those federal funds are distributed.

How Avantpage Can Help You Prepare Language Access Plans

As a language service provider who supports more than 150 languages, we can help you identify and anticipate your language needs, as well as help create strategized plans, so your services and/or products best match your community’s needs. We can also help provide you with our best budgeting recommendations. Our language services include translation, localization, interpreting, bilingual employee assessments, and many others.

If you’d like to stay in the know and learn when the census data is released, sign up for our newsletter! We’ll share it and much more in our monthly newsletter. For more information, contact us at [email protected] or (530) 750-2040.