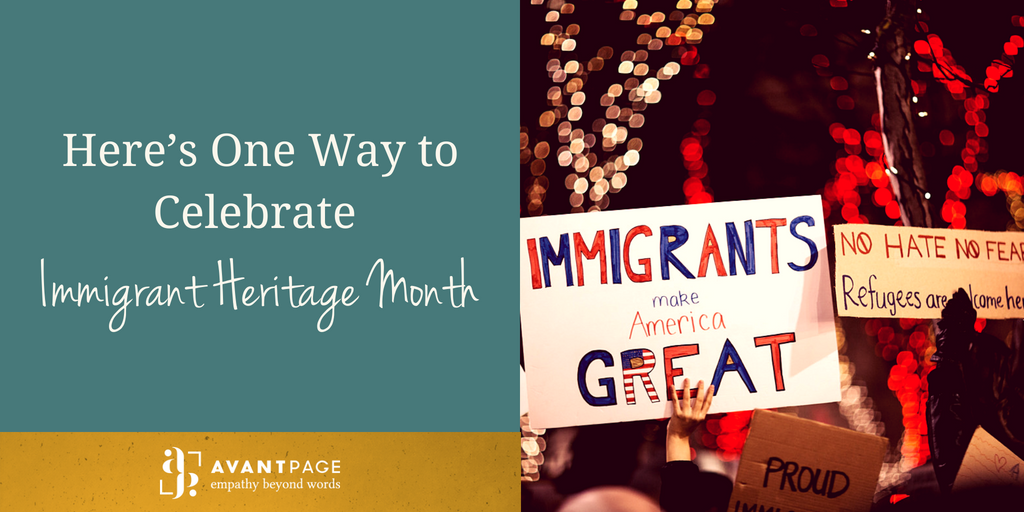 June is Immigrant Heritage Month in the United States. This is a time to celebrate being a nation founded by immigrants, and reflect on the nature of immigration and the stories we share about it.

At Avantpage, we believe all immigrants deserve the ability to reach their American dream. Our team of employees is international, and many have stories about being immigrants or being the loved one of an immigrant.

Sharing these immigration stories promotes visibility and open-mindedness, and there’s no better time to share them than during Immigrant Heritage Month. Here are some of the lessons our employees have learned by being an immigrant, or from those around them who are immigrants.

Juliana was born in Colombia, immigrated to Canada for five years, and now lives in Mexico City. While it was challenging for her to leave her home country, especially with the long, harsh winters in Canada, she’s learned great lessons from being an immigrant. Her biggest joy in being an immigrant is getting to learn about new cultures, experiencing new people, and learning about how they live. The biggest lessons she’s taken away from her experiences is to appreciate her own culture and to find strength in being independent and taking care of herself.

Vera immigrated from the Netherlands to Mexico. After participating in an exchange program in Mexico for school, she decided to indefinitely relocate to Mexico to pursue employment and perfect her Spanish. While she says her immigration went relatively smoothly, as she immediately found an employer willing to sponsor her in the visa application process, she found the paperwork and the bureaucracy to be the most challenging aspects of immigrating. She stressed that being an immigrant has allowed her to understand other cultures, and motivated her to reach for high levels of success. One of her biggest takeaways about being an immigrant is that no place is perfect; she works to enjoy the positive aspects of where she is and adapt to the local culture.

Monika immigrated from Poland to Mexico. She originally intended to stay for only one year on a scholarship for school, but remained in Mexico City for an additional year and a half. While the process of immigrating for her went smoothly, she said it took quite a lot of time. She had to first obtain a visa, then a student card, then she went through the process of finding an employer to sponsor her work visa. Her biggest challenge as an immigrant was navigating cultural differences. She felt like she was always being treated as a tourist, and had to learn how to navigate new public transport systems and healthcare systems. Even though Mexico became a home to her, she struggled with feeling like nowhere was really “home.” While this was all challenging, she notes that it gave her an appreciation of her own culture that she did not have before. The experience also gave her a new view of herself, how adaptable she can be, and the internal strength she has.

We’re sharing our employees’ stories for Immigrant Heritage Month on our social media channels. Check out our Facebook, Twitter, and LinkedIn pages to learn more about the immigrants on our team, and get more information on how we support immigrants striving to reach their American dream.

For more on immigration, and how we support immigrants, read some of our other blog posts:

Watch These 3 Powerful TED Talks About Immigration
Your Guide to 4 Organizations Impacting Immigration in a Big Way
My Immigrant Story – A Letter From Luis Miguel, CEO at Avantpage